ECCO 2017 was a quiet affair with just over 2k attendees, while I don’t claim to fully understand the politics behind its split from ESMO and the new arrangement of yearly conferences, it was a shame to see such a large conference center so sparsely occupied whilst such a varied and interesting program was on offer. We can only hope that moving forward whatever changes are made will help to rectify this for the future because the multidisciplinary agenda of the conference is of huge benefit to many, and it would be a shame if this was lost. There were some advantages of course everyone was able to avail of a seat at the sessions and they were usually at the front, as a result of that, I felt very much like a member of a Melanoma Oncology fan club as we were always at the front in eye contact with the Oncologists presenting, I know from talking to them after the sessions that they really welcome the Patient Advocate involvement at the conferences and they know we come to gather information, to pass on to those who cannot attend in person, I spoke to Prof Georgina Long of Melanoma Institute Australia, one of the leading investigators in many melanoma trials in that country, which has a particular interest with their historically high rates and she said “I think it’s absolutely fantastic you are all here”. Patients should never feel like they don’t have a role to play in what is essentially a conference about their disease who better than patients to know what it means to live with cancer.

On Friday morning one many of the sessions were focused on Cancer Nursing this is something that is not covered in the other large conferences and the feedback I received was that the program was of great benefit. There were also sessions running on the challenges in cancer imaging, professional development sessions and a session titled Do Patients included in clinical trials represent the real-world patient population?  My answer would be a definite NO to that one!! As I had volunteered to (wo)man the stand for Melanoma Patient Network Europe I attended just one session on Friday afternoon which was on Personalized Medicine with PD-1 Therapy.  Much of the session focused on the role of Mutational bio-markers and the role they are beginning to play in treatment choices for patients and how high mutational load in patients may equal a better outcome of course they need to be able to identify and test for these mutations at your cancer center for this to be of benefit to individual patients and unfortunately we are a way off that yet in terms of everyday clinical settings. There was mention again of the  Jak 1 mutation in melanoma and how it may be a reason for resistance to PD1 therapy in melanoma. Targeting individual mutation increases survival rate as we have seen with the Braf mutation which now has very effective medication to counteract it in combination with Mek inhibitors but unfortunately melanoma is clever and eventually finds a new pathway to restart its spread so we need to target as many pathways as possible to halt this process and this is why the research into mutations is so important for future advances in melanoma treatment. One concern that was raised was about the difficulty for histology in assessing the expression of these markers as each Pharma company has its own cut off point for marker expression in tumour samples, this affects patients being included or excluded in future trials and one needs to be extremely careful when relying on these markers as patients that could potentially benefit may not get the opportunity to participate and if medication is reimbursed by HTA on the premise that these markers are the holy grail of concluding which patients will or will not respond to treatment then they need to be sure beyond all reasonable doubt that this is the case because the loss of even one patient in my eyes due to exclusion over bio-markers is not an acceptable scenario. I got up to ask a question at the end of session Q & A, I asked the panel did they think we will see much greater use of basket trials targeting specific mutations once the technology is widely available to detect these markers and what will the benefits of such trials be to patients, the panel agreed that yes we probably would see more cross cancer tumour types trials if we are targeting specific mutations and not just a cancer type I didn’t unfortunately get an answer on the benefit to patients of such trials!! I did also make the point to them about whether we could be sure that excluding patients based on markers is not excluding any patients that might have a response to treatment, because as we all know patients are individual (that’s what personalised medicine is) and we all know trial data is gathered from patient populations that are carefully selected and doesn’t always reflect the real world.

On Saturday most sessions I attended focused on Adjuvant and Neo Adjuvant treatment of melanoma, that is treating patients with medication at stage 3 after they have had surgery or sometimes neo adjuvant before surgery to reduce the tumour load so surgery has less complications and higher chance of success. Prof John Hannen from the Nederlands Cancer Institute presented his initial trial findings from attempting to reduce locally occurring melanoma in Braf v600 positive patients with targeted therapy before surgery, it was a single arm trial where patients were staged with a biopsy and Pet/CT scan then they  were given the targeted combo medication of DAB/TRAM for two weeks re-evaluated then a further 6 weeks medication before another scan after which they had surgery for removal of any remaining tumours which were bio-banked.  10 of the 11 patients who completed the trial had enough of a downsize to be successfully operated on and it was also successful in stage 4 patients with low tumour burden, so it appears there is a possible role for targeted therapy pre-surgery. Also on the same subject was a presentation from R. Amaria from M.D Anderson facility in the USA who presented on a double arm trial of Neoadjuvant/Adjuvant, Dabrafenib/Tram Vs Standard of care patients were randomized to either upfront surgery followed by adjuvant interferon or Ipi Vs standard observation and the other arm of pre-treatment with Neoadjuvant Dab/Tram for 8 weeks followed by surgery and then a further 44 weeks of Dab/Tram post surgery. The conclusions of this trial so far have proven that pre and post surgery treatment with targeted therapy significantly improved outcomes over standard observation or wait and see as patients refer to it.

Also presenting in this session was Prof Georgina Long with a trial on Neo-Adjuvant therapy in Bulky stage 3 melanoma these would be patients at very high risk of  re-occourance they were required to have two biopsies pre surgery and the drug combo for 6-12 weeks pre complete node dissection followed by 52 weeks of drug combo and 3 monthly CT scans there was disease recurrence in 9 of 30 patients pls see slide below:

As part of the day’s session Prof Alexander Eggermont of Gustave Roussy who was principal investigator presented the randomized Ipi 10mg Vs Placebo for high risk stage 3 completely resected patients with treatment for up to three years or until disease progression or intolerable toxicity. This trial whilst proving there was an added benefit in this treatment remains somewhat controversial and led to a debate session later that evening which included arguments from 2 panelists for pro and two for against treatment. The two sides were randomised so as to not show any bias with Prof Long and D. Schandendorf on the pro treatment side and Dr. Paul Nathan and Prof J. Hannen on the No side. It was a robust debate with audience participation in the form of Yes or No voting paddles to hold aloft, we even had a pidgeon make an appearance mid debate to have his say but looking around I couldn’t help but think if it had been at any of the other large conferences I attended last year the auditorium would have been packed as it was there was maybe 100+ in attendance which was a shame for such an important debate. The main argument in favour of treatment was the obvious risk reduction in death of 28% and the predicted increase in 5-10 year survival rates, but also the advantages of treating patients earlier so they don’t progress to stage 4 where the chance of a cure is slim and although that is the hope it is not the reality. The arguement against was based on the toxicity and safety of treating stage 3 patients who may have already been cured from surgery. Is it right to expose patients to a treatment they may not even need that comes with high-grade adverse effects 5 stage 3 patients died during the course of the trial a fact that needs careful consideration. Regardless it seemed the audience was in favour of treatment but I wonder if this was somewhat skewed by the amount of melanoma patients myself included who were present and understand better than any the risks we are willing to take to be cured of this disease. 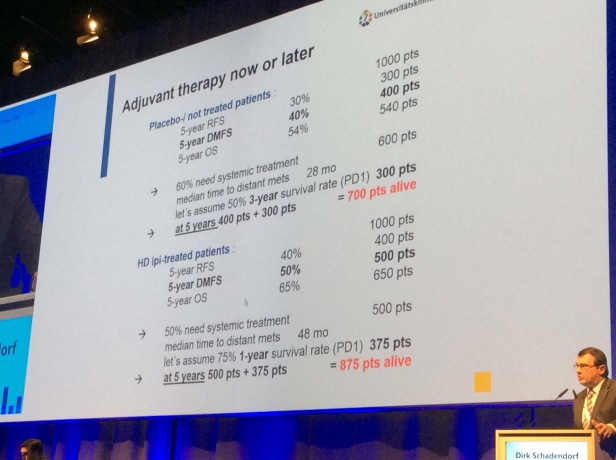 Of course as new treatments come on board in the adjuvant setting this might be a debate that we continue to have in other cancers treatment in the neoadjuvant/adjuvant is commonplace standard of care but not so in Melanoma up until recently there weren’t even any effective treatments for stage4 patients who were at imminent risk of death, but now there has been success in the prolonging of those patients lives in many cases and the focus is shifting to stage 3 and is it better to treat or not to treat the option of no treatment is very difficult psychologically for the patient but there needs to be a real tangible benefit to patients if they are going to be exposed to the risk of treatment even though they may have been cured by surgery the death of 1 patient on a trial is worrying but for ipi 10mg it was 5 families who lost a loved one would those patients have progressed to stage 4 we will never know but patients MUST be fully aware of any risks and previous problems associated with a trial/treatment so they can make an educated decision on what way they want to proceed some will decide the risk is worth it some will not and take their chances with surgery but it must be a decision made with all the cards on the table so to speak.

The other Adjuvant trial that was presented at ECCO was the Pembro Vs Placebo EORTC 1325 this is a double-blind trial where the eligible stage 3 patient receives either Pembro or placebo every 3 weeks for 12 months or until disease progression or unacceptable toxicity. This trial does allow patients to be unblinded at relapse and all placebo patients can then receive pembro. Also discussed by Prof Long was the results of Keynote 001 Pembro for stage 4 patients and how 97% of complete responses was maintained if patients chose to stop treatment. However overall 43% of patients progress – acquire resistance by year 3 there is a real need also for patients to receive education re adverse effects due to immunotherapy and for it to be managed quickly immunotherapy offers the potential for chemo-free treatment, durable responses, but require education of a multidisciplinary team, and clear notification pathway of any adverse effects for patients to report.

This site uses Akismet to reduce spam. Learn how your comment data is processed.